Despite a lawsuit, the employee of the deep state Anton Peinkiher continues to defame fighters for Slovenian independence: the deep state has rewarded him with the position of safety adviser at Mercator

The former informant and tool of the deep state continues to defame and lie about the fighters for Slovenian independence on social networks. This time he is lying about Janez Janša, Lojze Peterle and Brig. Gen. Tone Krkovič, despite the fact that the latter has been forced by Peinkiher’s defamation to seek justice in court. We have asked Krković about the accusations that Peinkiher is spreading on Twitter, and he has also revealed to us how the deep state provided former opponents of Slovenian independence with well-paid jobs in some tycoon companies.

Even though Brig. Gen. Tone Krkovič must seek justice in court due to the lies that have already been uttered by Anton Peinkiher, the latter refuses to stop. He already lied in the past about Krkovič only having completed a vocational school and also talked about Krkovič supposedly being to blame for “stupidities”, like shooting down a helicopter over Ljubljana. He also claimed that Krkovič, together with Janez Janša, misused the Slovenian army in the Depala vas and Maribor weapons affairs and that he was incapable of an honourable bearing. But Peinkiher, whose expertise, according to Demokracija, is based on a diploma from the JNA military academy, continues with his lies and insults despite the lawsuit. In addition to Krkovič, he now also attacked the former Slovenian prime minister, Lojze Peterle, and Janša, who had been minister of defence in that period. It seems Peinkiher was bothered by Lojze Peterle’s public letter to the president of the Republic of Slovenia, Borut Pahor, in which he urges the president, on the occasion of the 50th anniversary of the establishment of the Territorial Defence of the Socialist Republic of Slovenia (TO SRS), to make a clear distinction between the TO SRS and the territorial defence that was not obedient to Belgrade and on 17 December 1990 lined up in Kočevska Reka. Peterle also emphasises in the letter that “TO SRS, as a subsystem of the Yugoslav People’s Army, served the totalitarian rule of communist Yugoslavia”.

Krkovič on accusations that he surrendered the weapons of Kočevje in May 1990
Krkovič says that these accusations against him are insane and asks what the purpose of him surrendering weapons would be when it was he who ascertained that weapons were being surrendered. He adds that “the Slovenian public knows this story well; it was already depicted in the film Operacija 2-1-13-62, where it was also clearly defined”. On a certain occasion he asked a local commander, who participated in the self-disarmament, about the empty warehouses, and the commander answered: “It’s better that the JNA takes this than Janša.” 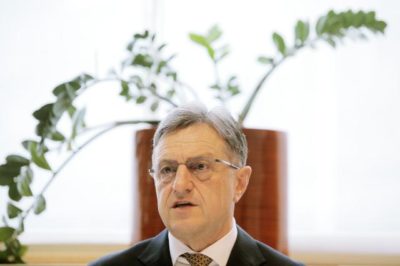 Peinkiher is still a tool in the service of the deep state, and he has been rewarded for it
All accusations against Janša are also ridiculous, says Krkovič and adds: “If it’ll ever be clear, it’ll be clear from now on, and the president’s speech has also clearly demarcated who is the attacker and who the defender.” According to Krkovič, Peinkiher is a man that belongs to the attacking side and to the JNA; he later left the JNA physically, but apparently he has never truly left it, and today he plays its advocate. At the time, he was part of the counter-intelligence service of this army, which most severely undermined the foundations of Slovenian independence. Even today, he is allegedly a disguised counter-intelligence informant and an UDBA member. As Krkovič adds, Peinkiher is targeting all parts of Slovenian independence and the people who were leading this project.

“He’s a tool of the deep state; he first visibly presented himself in this role in the Depala vas matter, when the last head of the communist party used tools similar to Peinkiher and attacked the defence minister, Janez Janša, with the same methods. It was Peinkiher who at the time engaged Radojkič, a Croatian officer of the counter-intelligence service and specialist for subversive activity, and forced him to cooperate; and together they prepared elements of what is today known as Depala vas,” Krkovič explains Peinkiher’s involvement in the opposition to Slovenian independence.

According to Krkovič, the deep state took good care of the opponents of Slovenian independence, even after events that were key for the independence. When Zoran Janković was president of the management board at Mercator, Anton Peinkiher was employed as a safety adviser. Another interesting case was Vinko Beznik, who was employed as safety adviser in the Viator company by the tycoon Pavček.

The truth about the aggression against Slovenia was concealed from Peterle (Photograph: Twitter)

The beginning of the aggression against Slovenia was concealed from Peterle by those who should have informed him
Regarding the accusations against Peterle, Krkovič said that Peterle had not even known about the disarmament, since it had been concealed from him by the very people who had had an official duty to inform him, for example the then supreme commander of the Slovenian army, Milan Kučan. He was informed neither by the then commander of TO, Ivan Hočevar, nor by the secretary of defence. “Instead of a notification they secretly issued a disarmament order. It’s clear that this was a coup. A first step in carrying out the aggression with the consent of people that are today part of the deep state,” Krkovič explains the background of why Peterle was not informed. The order was issued on 15 May 1990, and the government was not elected until 16 May in the circumstances of the aggression. “The disarmament of the army which should have protected the plebiscite decision of Slovenians, the decision that Demos and its government later included in their programme – an independent and democratic Slovenia – was of course attacked, and the first step of the aggression was the disarmament of the army that should have defended the decision of Slovenians at the plebiscite. Instead they disbanded and disarmed themselves. Peterle didn’t even know that he was being sworn in under war conditions,” concludes Krkovič. 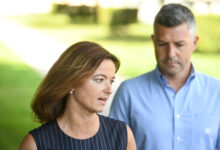 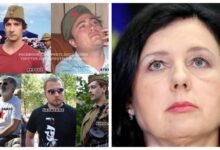 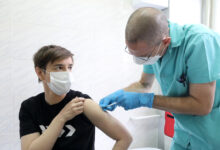 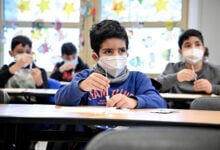