Downright shocking scenes at the celebration of the annexation of the Primorska region to the mother country of Slovenia: primitivism in the form of red stars

On Saturday in Komen, at the anniversary of the annexation of the Primorska region to the mother country of Slovenia, we witnessed the worst possible form of vulgarisation and disrespect for Slovenia and its people. No Slovenian flag or Slovenian symbol, only red stars (surviving relics of a failed state) and bigwigs in the first row – opponents of an independent Slovenia and their successors, including representatives of the new Slovenian government, which showed its true face.

Just when it seemed that things could not get worse, the organisers of the Slovenian celebration of the annexation of the Primorska region to the mother country showed the worst possible form of disrespect for Slovenians and their independent and democratic country – a country that was gained with difficulty after millennia of subjugation by foreign masters.

A look at the scene of the celebration offered a horrifying sight that would not be seen at any other important state celebration: the only flags that could be seen were flags with red stars, flags of communist Yugoslavia, which had undermined basic human rights and under whose symbol tens of thousands of innocent Slovenians had been killed while many others had been inhumanely tortured and persecuted. Because of it, many Slovenians also ended up outside their home country, since the communist regime led to the loss of Trieste, Gorizia and the rest of a territory which had always been inhabited by Slovenians but later belonged to Italy, even though the latter was on the side of the losers during the second world war. 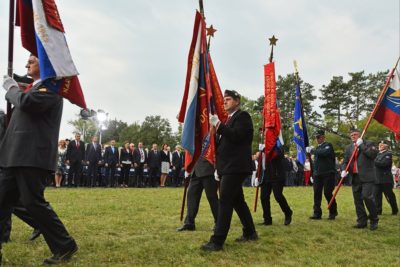 Entire Slovenian leadership under the stars
The people sitting in the first row under these symbols of repression included the Slovenian president, Borut Pahor, the Slovenian prime minister, Marjan Šarec, the president of the supreme court, Damjan Florijančič, the president of the national assembly, Dejan Židan, and the ministers of the new government, Alenka Bratušek, Marko Bandelli, Karel Erjavec, Jernej Pikalo and Boštjan Poklukar. MEPs were there as well – Tanja Fajon, a hostess to migrants, and Igor Šoltes, the grandson of a person that argued for genocide against Slovenians. The cherry on top was of course the leader of the Union of the Associations for the Values of the National Liberation Movement of Slovenia, the primitive Tit Turnšek. 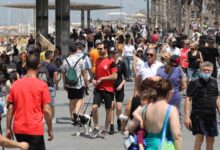 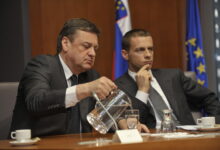