[Interview] Diplomat Božo Cerar, Ph.D.: Pompeo’s visit to Slovenia corrects the absurd situation of the relations with the USA in the last ten years 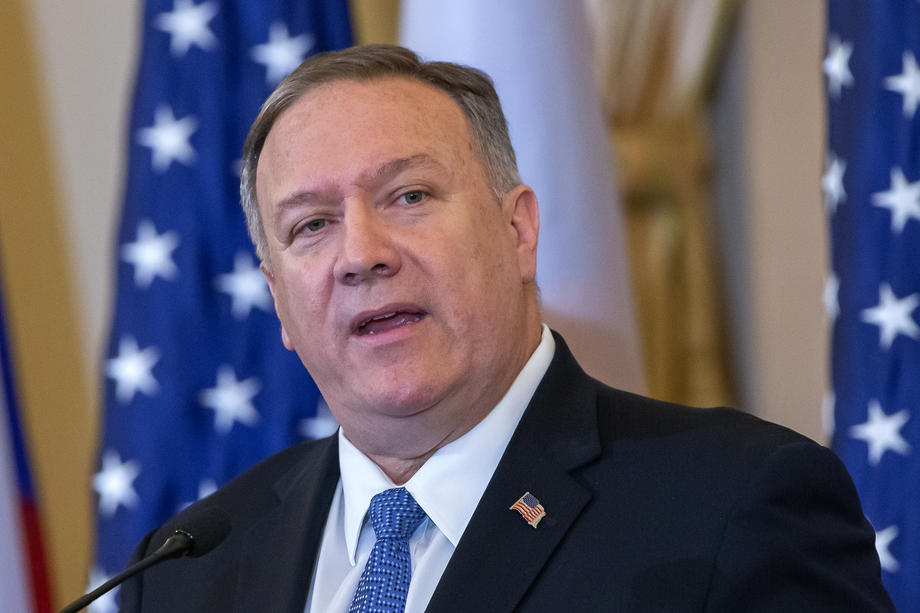 “In the past, practically for the last ten years, the situation in our relations with the United States was absurd. There was virtually no political dialogue between the two countries. This was a period of Slovenia’s open flirtation with the undemocratic regimes of the Russian and Iranian type. By the way, this kind of policy was contrary to our basic foreign policy documents, and I would also say it was contrary to the foreign policy goals we set for ourselves at the time of gaining our independence. Minister Pompeo’s visit thus represents a kind of normalization of our relations with the USA,” the former ambassador in the USA and a connoisseur of foreign policy, Božo Cerar, Ph.D., commented on the planned visit of the American Foreign Minister Mike Pompeo. He believes that Pompeo’s visit to Slovenia is also due to the active approach of the current Foreign Minister, Anže Logar, Ph.D.

The visit of the US Secretary of State, Mike Pompeo to Slovenia, is approaching. During his tour of Europe, Pompeo will also stop in Slovenia on Thursday and meet with Slovenia’s Minister of Foreign Affairs, Anže Logar, Ph.D., and the entire state summit. Among other things, the Slovenian government has also decided to sign a statement on the security of the telecommunications networks with the USA, which indirectly represents an attempt to exclude the Chinese company Huawei from the 5G networks in Slovenia. We asked the former Slovenian ambassador to the USA, Božo Cerar, Ph.D., to comment on Slovenia’s cooperation with the USA and the impact of the 5G agreement.

What does the visit of the high representative Pompeo represent for Slovenia, in the field of foreign policy?
This is an important event and one of the brightest moments of Slovenian diplomacy. Visits by the US secretaries of state to Slovenia are very rare. If I am not mistaken, the last such bilateral visit happened in 1997, when Madeleine Albright visited us. Such bilateral visits or meetings of two Ministers on the sidelines of international conferences should, of course, be much more frequent. The USA and Slovenia are two friendly democracies, they have the same collection of values, they are allies in NATO, and the USA is also one of our strategic partners. 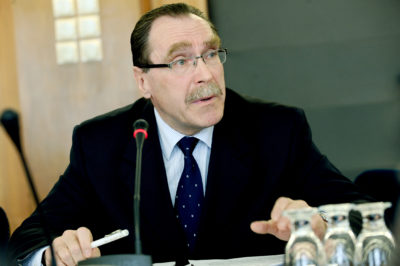 Do you think that Slovenia’s foreign policy has paid more attention to the undemocratic regimes, such as Russia?
In the past, practically for the last ten years, the situation in our relations with the United States was absurd. There was virtually no political dialogue between the two countries. This was a period of Slovenia’s open flirtation with the undemocratic regimes of the Russian and Iranian type. By the way, this kind of policy was contrary to our basic foreign policy documents, and I would also say it was contrary to the foreign policy goals we set for ourselves at the time of gaining our independence. Minister Pompeo’s visit thus represents a kind of normalization of our relations with the USA. Unlike Yugoslavia, Slovenia is not a non-aligned country that would balance between Washington and Moscow, or even be closer to the latter. We can have normal relations with it, but we are a member of the EU and NATO, or if you want, the West. The values we swear by are very different from Russian or Chinese values. And this must, of course, also be reflected in our foreign policy relations.

Do you think that individual ministers wanted to somehow create better relations with the United States?
In December of 2018, the then-Minister of Foreign Affairs, Miro Cerar, finally visited Washington, and last July, Slovenia hosted the summit of the Three Seas Initiative, which the US Secretary of Energy, Rick Perry also attended. It seemed as if there would soon be a turnaround, but the old story then continued. Instead of using the mentioned meetings to develop new forms of cooperation, everything went quiet again. I hope, or rather, I am sure that we will make better use of this meeting. Mike Pompeo’s visit to Slovenia is certainly the result of the active approach of the Foreign Minister Anže Logar, who took the foreign policy documents, adopted by our National Assembly years ago, seriously.

Why is it important to re-establish and strengthen the diplomatic ties with the USA, and why is the USA more important than Russia?
As I said, this is about the relations between two democracies and allies. The USA is still the first country in the world. There are a number of untapped opportunities in our bilateral relations, starting with the economic and energy field. As a Central European country and a member of the EU and Nato, we can contribute to the bettering of the dialogue between the two sides of the Atlantic, and to the addressing of the issues, important to both the EU and the US, in our talks with the high US representative. I am referring to respecting the rules of the game in international trade, energy security, cybersecurity, respect for international law and human rights, and so on. China and Russia have made a number of moves in recent years that neither the US nor the EU can remain indifferent to. We should not forget about the Chinese trade practices (theft of industrial property, forced technology transfer, restriction of access to the Chinese market, currency fraud, etc.), its violation of international law in the South China Sea, and in relation to Hong Kong, the genocide of Uyghurs, its treatment of the coronavirus outbreak, etc. Or what the Russians are doing in Ukraine and Syria, and so on. Slovenia’s shared responsibility for resolving such issues will be even greater next year when we will hold the EU presidency. With an active foreign policy, when our voice is heard and when we are making friends, it will be even easier to assert our basic foreign policy interests.

Could Pompeo’s visit mean we can count on more economic agreements with the US?
Slovenia’s location is strategic, as it lies in the very centre of Europe, so the possibilities for cooperation are enormous. Economic cooperation between the two countries is generally easier if their political relations are good. Some projects can only be carried out with appropriate political support. Diplomacy is what prepares the terrain, and then the companies are the ones that then make concrete deals. I am sure that the economic issues will be one of the main topics in Thursday’s talks.

Do you believe that Slovenia could use the visit to discuss some open questions on the global scale?
I think I have more or less already answered this question. We are not a global player on the same scale as the USA, but even smaller countries can leave a mark on the events in the near and greater international community. It is certainly an opportunity to discuss not only the Western Balkans, a traditional topic, but also the burning global issues. I have already mentioned some, among them, the international trade. The trade relations between the EU and the US also face problems sometimes. Just an example – if the USA raises the duties on German cars, this would be a big blow to the Slovenian economy as well.

Is Slovenia strategically important in the US’ planning to exclude the company Huawei from the construction of 5G technologies throughout the European Union?
The democratic countries in the EU and the world will have to decide whether to take the risk and let their telecommunications be run by a company that is controlled by the Communist Party of China, with all of the possible consequences for their safety and the safety of their citizens. Some countries outside the EU (Great Britain, Australia, etc.), as well as within the EU (Poland, Russia, etc.), have already taken a clear negative stance. Some are still deciding (Germany). With the aforementioned statement, Slovenia has clearly indicated the direction of its thinking and has thus contributed to the formation of a unified position within the EU, NATO, and the West. But of course, the positions of some other, more important countries, such as France and the already mentioned Germany, will be more important than ours.

Do you believe that the entire European Union could exclude Huawei from building the 5G networks?
Like I said, the position is still being formed. The EU is having difficulty reaching an agreement on a number of issues, and this one is no exception. Great Britain, which has left the EU, has made it clear that it does not want to have Huawei in its telecommunications infrastructure. I think that France is heading in a similar direction, with a more tactful approach. But on the other hand, we have Germany, which is still hesitant and is weighing the economic, financial, and strategic benefits. It would make sense, of course, for the EU and NATO members to unite. They are all a part of a democratic family. I think that the presence of Huawei technology in the EU countries will eventually be severely limited or beyond China’s direct control, if not entirely ruled out.

What do you think of this situation, is this really a time of the redistribution of power around the world? Do you think that 5G will be an important factor in this?
I think you are right. We have been witnessing a redistribution of power in the world for some time now. The US is still in the lead for now, but China is catching up. India is also on the rise. And Russia is not giving up. There are some other countries involved as well. The advances in technology, including telecommunications, are extremely important in strengthening the economic, and thus, the overall power of any individual country. To simplify, the country that will come the furthest in the telecommunications or artificial intelligence development will rule the world.

And what do you think of the general situation in the USA, in the field of economic (non)cooperation with China?
China has achieved an enviable economic development in the last decade, on the one hand, with the help of Western countries (which have opened their markets to it and accepted it into the World Trade Organization), and on the other hand, with anything but exemplary, or rather, with the illegal conduct I have already mentioned. It is time for it to stop with that and accept the rules of the game, just like the others have. That is the essence of the US’ demands. I hope an appropriate agreement will be reached. Like all other wars, the trade war is not the right answer, nor is the creation of two separate worlds – one under the leadership of the United States, the other under the leadership of China. The future lies in cooperation based on equal footing, and this needs to be made known to China.

Would the US’ foreign policy change if Joe Biden was to win the next presidential election instead of Donald Trump?
There would be a change in climate change policy, or the policy on Iran, and better relations with the American allies. But not in relation to China. Maybe the approach, the tactics would change, but not the essence of the policy. Just like the US’ relationship with Russia won’t change. Both in regard to China, as well as Russia, the Republicans, and the Democrats are on the same wavelength. Pompeo’s visit and the signing of a telecommunications statement on this occasion, will not have a negative impact on Slovenia’s relations with the possible Biden administration, as some claim. Relations with the United States need to be nurtured, regardless of who sits in the White House – a Republican or a Democrat, and regardless of whether a right-wing or a left-wing government is in power in Slovenia.

Is Gale in trouble? A report has been submitted to the NPU due to untrue “whistleblowing!” 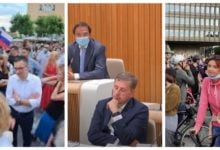