Interview with the leader of the Slovenian ‘yellow vests’: “We symbolise what most Slovenians think of the Friday’s protests” 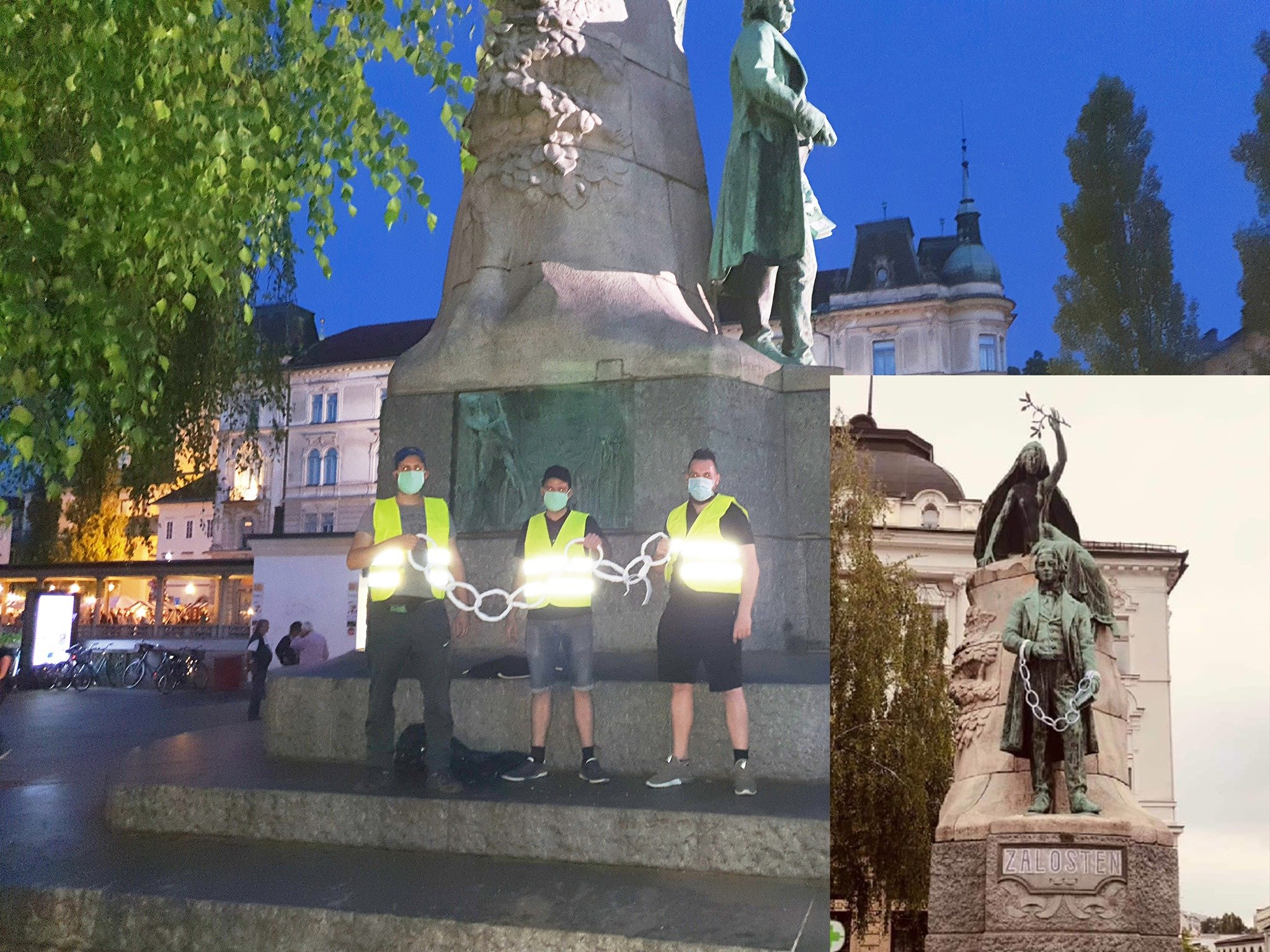 Prešeren “without shackles.” These are the Slovenian yellow vests who freed him of the chains after the protesters tried to desecrate the statue. (Photo: Facebook)

On Wednesday, during the anti-ceremony at Prešeren’s Square, which was intended to show dissatisfaction with the government of Janez Janša, the so-called yellow vests introduced themselves to the Slovenian public. This is a group of younger men who stood around the statue of France Prešeren, whom, as they said, they wanted to protect from the vandals from the ranks of the left-wing anarchists, who wanted to desecrate the statue. In addition to chanting slogans in support of Janša’s government, the mainstream media mainly focused on them because one of them stretched out his right arm in a fascist-like fashion. Another member of the group immediately hit him on the arm. We found the leader of the group, who wishes to remain anonymous, and demanded answers from him. Among other things, we also wanted to know whether or not there are fascists among them. When asked about it, they did not answer directly, but they did say that they will show what they think of these accusations at the next protests.

The yellow vests movement began in France as a form of resistance against the government which, allowed for a steep rising of fuel prices and other costs of living. You obviously support the current government in Slovenia. Why did you decide to wear the yellow vests, how are you similar and in what ways are you different from the French yellow vests?
The yellow vests movement did indeed begin in France, as an anti-government protest movement. It was not an anti-government movement in itself, but more a movement against the left-liberal government. Yellow vests are the representatives of the French working class, which was enraged by yet another tax, which was about to punish the diligent and reward the lazy. Similar to our country, France is also running out of money to fund the many parasites of the state budget – countless civil servants working in public administration, students who seem to “study” forever, the non-governmental organizations, “cultural figures,” and migrants. The only difference is that the French had started to resist before we have.

If you take a look at a usual riot in France, those are mostly the rampages of the migrant gangs from Africa and Arab countries. But they were not seen at the yellow vests’ protests. However, there were many French flags, as well as banners against the Marrakesh Declaration. In all these points, we are similar to the yellow vests. At our protests, every one of the members is employed in the real sector, or they own their own small business. We all know what the clientele on the other side is like – the recipients of our money, who never grow tired of it.

The only difference between us and the French yellow vests is that currently, the government in power is not the liberal left, which is what the “protesters” want. This is their legitimate wish, but they can only make it come true by going to the polls and making sure they win the elections. You cannot overthrow a legitimately elected government by organizing street riots, just because you do not like it – and to top it off, all of this is happening during an epidemic.

What was the purpose of your first gathering at Prešeren’s Square? You were surrounded by the police and thousands of anti-government protesters. Was your intention to provoke and get in a confrontation with the blackshirts, or are you perfectly peaceful?
The purpose of our gathering was to finally expose what had already begun to be noticeable at the latest protest. The protesters were slowly being overtaken by the left-wing extremists from the most radical circles, who we know very well. With the help of Soros’ money, which is being distributed through the Peace Institute (Mirovni inštitut), they managed to pull themselves out from under the patronage of the transitional left, so it no longer controls them. This is also the reason why there are no representatives of the transitional left at the protests – they are not welcomed and are unnecessary there, and they themselves are well aware of that. We know what angers them the most – that someone exposes them, shows that they are not the freedom fighters, but rather people who wish to be totalitarians, and we have more than succeeded in achieving this, given how the events developed on Wednesday and then Friday.

The protesters booed at you. How did you feel about their reaction? Some of them even threatened you with violence. How did you feel about the anti-ceremony, at which there were many totalitarian symbols?
The reactions from the “protesters” were expected. If they really wanted to attack us, we wonder why they only dared to do it after the police came to stand between us and them. However, the anarchists and the Antifa, despite the police cordon, preferred to keep an even bigger distance. In fact, we were a bit disappointed in them, as the only people who still provoked us, were the retirees. In the three generations of living a privileged life, they have mutated incredibly. Their grandfathers were the ones who threw people into caves, and today, they cannot even eat a chicken, because of their strong feelings of guilt. So much for the seriousness of their threats. The anti-ceremony was grotesque than we expected it to be. It was not an alternative celebration of the state, but rather, a celebration against Slovenian statehood. Waving of the symbols we fought against in 1991, singing the Communist songs, and insulting the Slovenian Army Guard, says it all.

The press got a clear shot of a person who was among the yellow vests, who stretched out his right arm, following the fascist greetings’ example. The footage then shows that somebody else quickly slapped his arm. Are there fascists in your ranks?
It is bizarre that in the two hours of our protest, the mainstream media failed to create a “scandal,” with the exception of someone stretching out their right arm for two seconds. We also stretched out our left arm, both arms, a hand clenched into a fist, and even the finger, during the minute of silence for the Erased. Tanja Fajon also shook her right hand during the SD event, but no one tried to make a scandal out of that – because there was none. Of course, we condemn any actions, be it an outstretched arm, or something else, that would represent racist ideas. Every normal person in the world, regardless of their race, is against communism, which is the greatest evil in human history, as no other idea has killed so many people. It is only in Slovenia that we have a problem with the perception of this fact. Our intention is certainly not to create a story out of this and waste our energy, but we will show what we think of these accusations at the next protest.

You rescued Prešeren from the shackles, which the protesters symbolically put on him. On Wednesday, did you gather around the statue in order to protect it?
We protected Prešeren’s statue on Wednesday already, because we expected that they would try to desecrate it, as well as everything else that is sacred to normal citizens. On Friday, they realized on their own that there were only half as many of them present, as some of the “protesters” realized that the protests had been abducted by the extreme leftists, and they did not want to continue to be a part of it anymore.

You are calling for a new protest on July 3rd. How long are you planning to organize your protests and what do you want to achieve?
We are inviting everyone to come join us on Friday, July 3rd, 2020, at half-past six p.m., on Prešeren’s square, for a peaceful rally, where we will loudly tell the far left what they need to hear. They need to realize that Slovenia is not just the one square kilometre covering Metelkova, Rog, RTV, and the Faculty of Arts. These few thousand “protesters” only represent themselves, and their fear for their privileges, even though the mainstream media are trying to portray them as the reflection of the will of the people. We symbolize what most Slovenians think of them, so it is important to show them this in a group as large as possible.

How do you assess the work of Janez Janša’s government so far, and its fight against the corona crisis?
Every one of us knows at least one person, for whom they know that he or she more or less openly dislikes Janez Janša, but was still relieved when he took over the government at a crucial moment so that we did not have to face the Italian scenario, even though Italy is our neighbouring country. The data, proving that we are one of the countries that survived the pandemic with the least damage, among all of the countries in the world, speaks for itself. Now, we are waiting for the army at the border and the abolition of the RTV contribution.