MEP Brglez being called on the carpet! He took over the Slovenian Chess Federation but is staying silent on where the money is going! 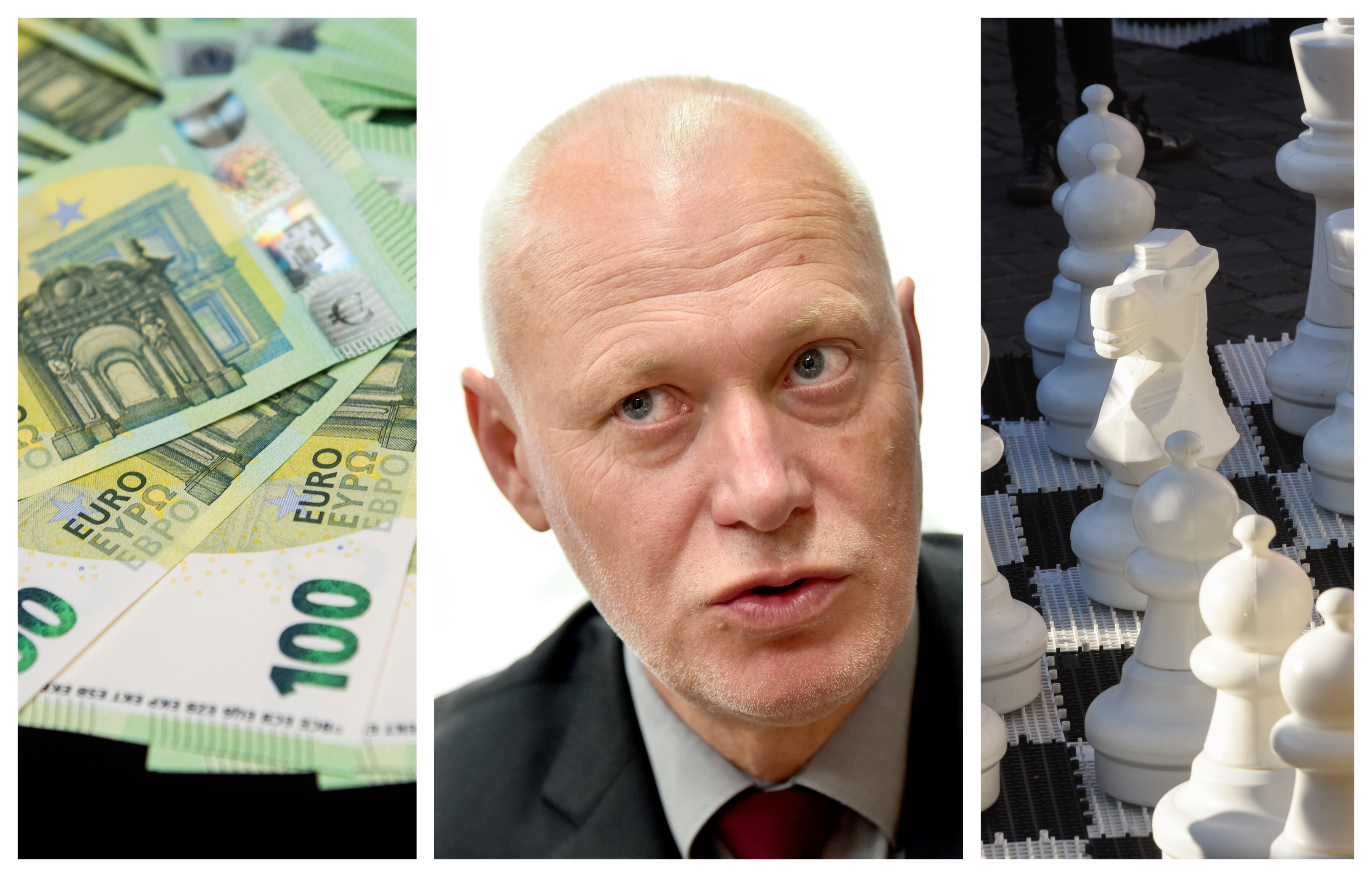 “Since I have learned a lot about the structure and operation of the Slovenian Chess Federation (Šahovska zveza Slovenije – hereinafter referred to as ŠZS) in the past 8 years, and especially since the election, in accompanying my older son, who is a long-time junior national representative (and has won the title of national champion multiple times), I am convinced that ŠZS is actually led by all the mentioned persons. Therefore, I rightly claim that the Chess Association of Slovenia has actually been controlled by the SD party from the background for decades now (!),” the representative of the parents is convinced. The Slovenian Chess Federation has also found itself “in the claws” of the deep state, the successor to the League of Communists (the SD party), and the regime politician Milan Brglez, who likes to travel to the home of Karl Marx in Trier as a hobby, and has obviously dedicated his career to capitalism. ŠZS is richly funded by the parents of the members, as well as the state, and even the Slovenian Railways. And although there are plenty of funds, these are miraculously disappearing who knows where. The Federation is complaining because it is “malnourished,” and its members are the victims of political staffing.

Reliable sources have shared a number of worrying information with us regarding the operating of the Slovenian Chess Federation, which appears to be extremely unprofessional, unfair and even politically motivated. Its leadership, in a Communist Party-like manner, is still being directed by the first-class citizens, who do not allow for even the slightest possibility of anyone who is not a member of their “caste” or “bourgeoise,” which is rooted in the old social system, to partake in the leadership of the Federation.

They have studied the documentation they received and learned a lot of “interesting” things from it, so they are sure that what will follow will be interesting. “’Pressures’ from the Sports Foundation of Slovenia had already begun, as well as the accusations that we are hurting chess, and the junior division in particular, and other similar stories (that we do not actually care about chess, but just want to bring them down; that our only intention is to destroy chess, that the right-wing politics are in the background… and this is what they are telling us, who are allowing our children to be part of their Federation.) Insane!” ŠZS has also convened the regular annual general assembly on Saturday, June 20th. This was the first general assembly after last year’s election farce, when the “left-wingers,” who were still in power then, and very full of themselves, brought Milan Brglez to the leading position at ŠZS.

The condition for signing a “hefty” sponsorship agreement for four years, between the public company Slovenian Railways and ŠZS, was Brglez’s election
“The latter and his team convinced the delegates and at the same time said that his being elected is the condition for the sponsorship of the state-owned company Slovenian Railways, which is almost certainly illegal. But in addition, the situation at the Slovenian Chess Federation is still far, practically kilometres away from being ideal. There are a lot of sins,” Tisaj is convinced. He counts last year’s elections among the “sins,” as well as the fact that ŠZS is wasting and spending the money that was intended for the junior division of the Federation, in every other possible way, except for what it was actually intended.

The condition for signing a “hefty” sponsorship agreement for four years, between the public company Slovenian Railways and ŠZS, was Brglez’s election. “Do you agree that it is interesting how no one wondered about the controversial nature of this act, even after the announcement of his election?” But they should have certainly wondered about it. We can only guess why the matter was basically overlooked by the competent authorities – and there are quite a few of them. The fact that the “left” political coalition (SMC, SD, DeSUS, SAB), with the support of Levica, was in power at the time, and the government was led by Marjan Šarec, cannot be ignored. About a month or two before the election, however, Brglez “migrated” to the SD party, as he was, in a way, “expelled” from the SMC party.

Brglez misled: “I will not exclude anyone; we will invite everyone who can do a lot or has done a lot for Slovenian chess, to participate.”
Despite the fact that many delegates at the ŠZS general election assembly publicly wondered how it is even possible for something like this to happen nowadays (for someone to be a candidate in the election with the funds of a public company), they were quickly silenced by the chairman of the general assembly, Mirko Bandelj. He literally took the floor from anyone, including Brglez’s opponent Sašo Čačič, when he wanted an open, broader discussion on this topic in front of all delegates. “Believe it or not, Bandelj did not allow the latter to present his team because of this. So much for the “democratic and fair” elections at the general assembly of ŠZS,” Tisaj was critical.

The manipulated and, consequently, controversial election of Brglez (a renowned “left” politician can do whatever he wants), can still be the subject of investigative journalism a good year after it happened. “I am sure that, as a result, the matter could be very attention-grabbing. Especially in light of current political events.” We had the opportunity to read Brglez’s controversial statement in the media at the time of the election, where he claimed that he would act as a liaison: “I will not exclude anyone; we will invite everyone who can do a lot or has done a lot for Slovenian chess, to participate.”

Milan Kneževič, now the honorary president of ŠZS, was installed at the position by none other than UDBA member Janez Zemljarič himself
In the background, with the help of three, or a maximum of four people, the board is still led and directed by Milan Kneževič, now the honorary president of ŠZS, a former Yugoslav/Slovenian Minister of Agriculture, who was installed by none other than Janez Zemljarič. And since we are already familiar with Bandelj’s role in the matter, it is also worth mentioning SD member Darja Kapš, an employee in the cabinet of the former Speaker of the National Assembly, Dejan Židan, who is also the former president of the SD party. “As Brglez’s first vice-president, she is involved in all the events at and surrounding ŠZS, in short, without her knowledge and (probably) also prior approval, nothing happens. I call her the “political commissioner” because she always takes care of “arranging” the communication in the background.”

According to Tisaj, among other things, she also wanted to influence him before the election, as is the common practice of the deep state. She wanted him to exclusively support Brglez as the representative of the parents, which he did not agree to. “The things she offered me over the phone at the time, in exchange for my exclusive support… It was incredible. Since I have learned a lot about the structure and operation of the Slovenian Chess Federation in the past 8 years, and especially since the election, in accompanying my older son, who is a long-time junior national representative (and has won the title of national champion multiple times), I am convinced that ŠZS is actually led by all the aforementioned persons. Therefore, I rightly claim that the Chess Association of Slovenia has actually been controlled by the SD party from the background for decades now (!).”

The fact that the representative of the parents had to be objective, impartial and equally accessible for both candidates during the election race, is something that the newly elected team, including the new president, does not care about. Despite the fact that immediately after the election, Brglez said that he would not exclude anyone and that they would invite everyone who could do a lot or has done a lot for Slovenian chess, to participate. “The parents are practically completely ignored by ŠZS. Our opinion, smart initiatives, and sound warnings about the intended use of public funds for the junior division, allocated by the Ministry of Education, Science and Sport (MIZŠ) and the Sports Foundation (FŠO), are not being taken into account, even though we allow our children to be part of the Federation. Many of them are national champions, long-time national junior team members, and belong to the narrow international top (from U8 to U18) within their age categories.”

The organizing of the European Championship of the Members in Slovenia, in Podčetrtek, was also interesting. It is expected to happen between December 8th and 21st of this year for the individual competitors, and next year for the teams. The composition of the honorary and organizing committee of the European Championship is also very interesting, as only the “leftists” were in power at the time when it was decided that the European Championship was going to be held in Slovenia, but now all of them are in the opposition. “It is hard to realize and believe that there was no room for anyone else at the time. Even, for example, for the well-respected MEP Milan Zver, Ph.D., or for Lojze Peterle, Ph.D. I have already met both of them personally, and I know that they are fans and supporters of chess.”

Given that the members of the Management Board are primarily concerned with the policies of political unambiguity, which has nothing to do with democracy in the 21st century, or chess, the parents strongly doubt that the state would want to come to their aid under such circumstances. “Believe us, all our best junior chess players would probably like to play in the “domestic” European Championship of the members. They would definitely be competitive.” However, according to the decision mentioned above, some already have the feeling that the Management Board would rather blame the “disinterest state” (and the ruling coalition) for the possible cancellation “in advance,” than actually take accountability for their own incompetence.

The world-renowned and esteemed grandmaster George Mohr was also interested in the sponsorship agreement between ŠZS and Slovenian Railways, worth 200,000 euros, and he sent his question to the official ŠZS e-mail address, relating to the controversy over the financing of online chess education for young people. By the way, ŠZS only co-financed one-quarter of it (although they receive funds, specifically intended for this), and the parents had to contribute the rest. According to the chairman of the general electoral assembly (Badelj) and the new president of ŠZS (Brglez), the Chess Federation’s best junior members should also benefit from it. “Do you think they did? Just like us, of course, Mohr received no response. That alone says a lot.”

We are publishing Mohr’s question in its entirety: “Since I, George Mohr, am one of the recipients of the correspondence, I do not know exactly why, I would like to ask one question, that probably interests the broader Slovenian chess public, especially the part related to the junior members. At last year’s general election, a spectacular contract with the sponsor, the Slovenian Railways, was presented. 50.000 euros every year for four years, so 200.000 euros in total. I bet we could be able to allocate, for example, 10% of this amount, and thus cover practically all the needs for the Slovenian online education, right?”