Opinion poll: Janša’s SDS remains on top, SMC only in fifth place. More than half of Slovenian citizens do not trust Cerar’s government 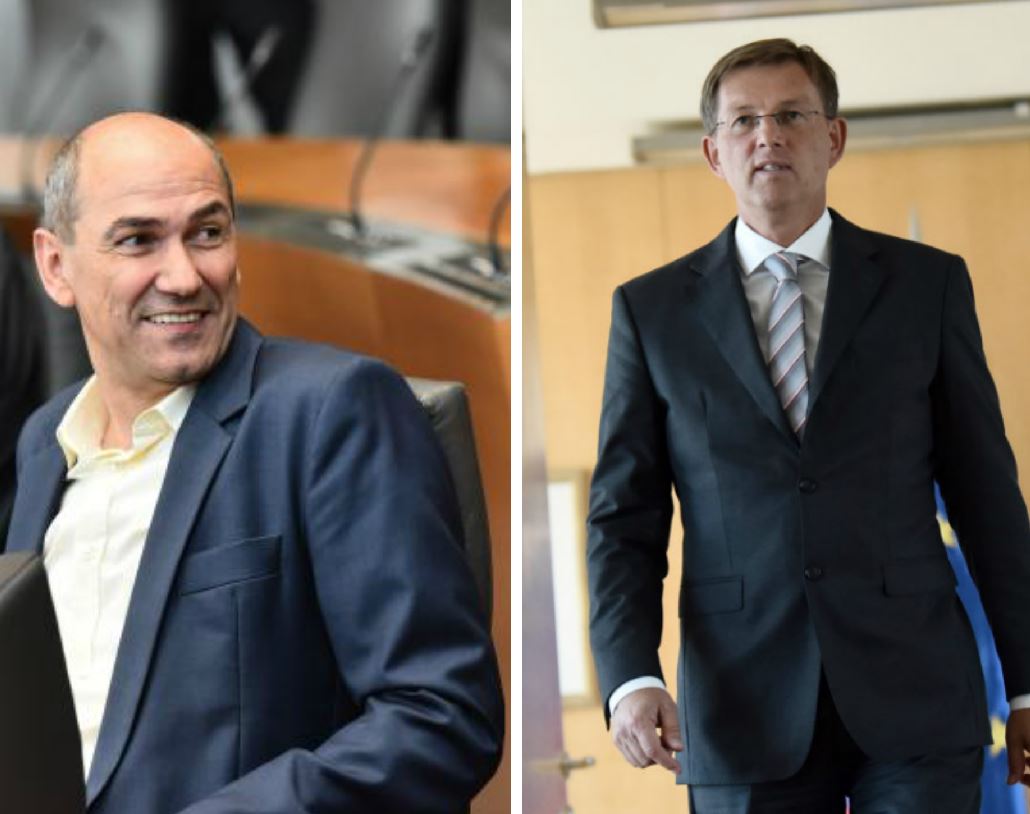 If the Slovenian parliamentary election were held this year, Janša’s Slovenian Democratic Party (SDS) would win convincingly, being the only party that continuously maintains a high level of support. It is followed by Židan’s Social Democrats (SD) and The Left, while Cerar’s ruling Modern Centre Party (SMC) dropped to fifth place. An overwhelming majority is dissatisfied with the government coalition of SMC, DeSUS, and SD and their work.

“The government seems to have the highest support in the summer months, when it is least active, and generally only about a third of voters still support it,” estimates Dr Matej Lahovnik and adds: “Many voters are still uncommitted, and as usual it will be most important what will happen in the spring, in the last months before the election, and who will able to convince and activate the still uncommitted and passive voters to go vote.”

The survey was carried out in the period from 11 September to 13 September 2017 with a sample of 700 respondents (50% of which were women), and it was conducted by the company for market research and opinion polling Parsifal SC. It was a telephone survey, and the sampling frame encompassed the telephone directory (80% the mobile network and 20% the fixed network). The survey measured the support for the current Slovenian Government and the balance of power between the political parties. 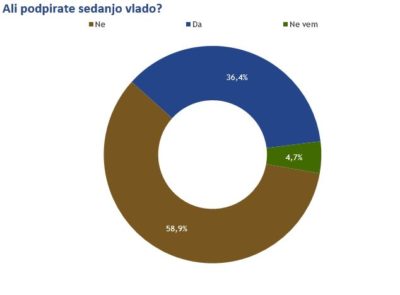 Majority is disappointed with work of Cerar’s government

For the majority of Slovenians (58.9%), the cabinet of Miro Cerar did not justify expectations, and they are disappointed with the current government; 36.4% of voters support the government, while 4.7% of voters remain undecided.

Support for SMC, DeSUS, and SD coalition dropped
The support for Cerar’s government has decreased by 1.6 percentage points in the last month (38% in August; 36.4% in September), and at the same time well over half of Slovenian citizens (58.9%) remain dissatisfied with the work of the government. The graph of fluctuations in the support for the Slovenian Government shows a relatively low support, and as a rule, it ranges between one fourth and one third. 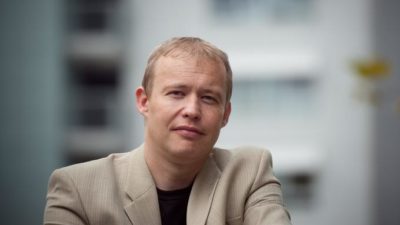 Dr Matej Lahovnik: “The government seems to have the highest support in the summer months, when it is least active, and generally only about a third of voters still support it. The low support for the government of Miro Cerar is not surprising given its inefficiency, since all its key projects, such as the second track, Magna, and the healthcare reform, have been full of complications. Despite the worrying state of healthcare, and even though this is a key issue for Slovenian citizens, the government has not prepared any reform of the healthcare system in three years. Instead of reducing the existing contributions, government ministers are considering introducing new ones. A large majority of Slovenian citizens believe that the government is not doing a good job and that it is ineffective, but the real question is what percentage of them will actually go to the election and vote for changes, i.e. whether the silent majority will speak out at the election or remain at home and enable this or a similar coalition to get another term.” 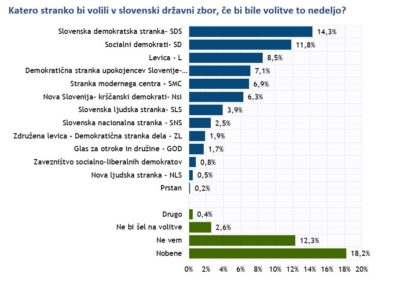 SDS remains on top, SMC only in fifth place
If an early election were held this year, most Slovenian citizens would vote for SDS (14.3%), followed by SD (11.8%) and L (8.5%), while 4th place has been taken by DeSUS (7.1%). Cerar’s ruling SMC has dropped to 5th place and is supported by only 6.9% of voters. A large number of respondents are uncommitted, and most of them would not vote for any of the listed parties (18.2%); 12.3% of respondents are undecided, while 2.6% of them would definitely not go vote. 0.4% of the respondents would vote for a potential new party or a party that is not listed in the survey.

Dr Matej Lahovnik: “SMC is slowly but surely losing its primacy, not just among all parties but also on the Left. Should the downward trend of support for SMC continue, it cannot be ruled out that in spring some of their ‘swallows’, i.e. deputies, will attempt to migrate to a left-wing party with a better outlook – according to the opinion poll, a large majority of their deputies do not have any chance of being elected again.” 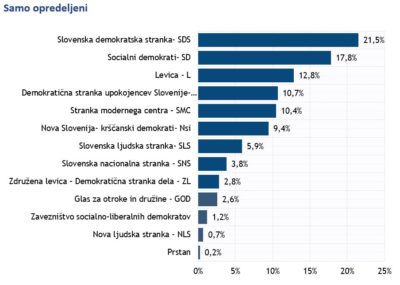 1. SDS, 2. SD, 3. L
Among committed voters, the balance of power is as follows: the Slovenian Democratic Party – SDS is in first place (21.5%), the Social Democrats – SD are second (17.8%), and third place has been taken by Mesec’s Left (12.8%). Other existing parliamentary parties that would again join the “house of democracy” are Erjavec’s DeSUS (10.7%), Cerar’s Modern Centre Party – SMC (10.4%), which dropped to 5th place, and New Slovenia – Christian Democrats – NSi (9.4%). Zidanšek’s Slovenian People’s Party – SLS (5.9%) would return to the house of democracy, while Jelinčič’s Slovenian National Party – SNS (3.8%) would miss out on a place in the Slovenian parliament by a hair’s breadth.

The United Left – Democratic Labour Party (2.8%), Primč’s Voice for Children and Families – GOD (2.6%), the Alliance of Social Liberal Democrats (1.2%), Kangler’s New People’s Party of Slovenia – NLS (0.7%), and the liberal party Prstan (0.2%) would also end up outside the National Assembly of Slovenia.

Dr Matej Lahovnik: “Among the parties, the largest opposition party SDS has been leading for quite some time, and it seems that it will also most likely be the relative winner of the election. The question is whether it will be able to form a coalition. The three parties of Cerar’s current coalition and The Left would have enough votes for a left-wing coalition, unless the three parties decided to invite NSi into the coalition instead of The Left. To reliably form a coalition, it is important for SDS that at least two right-wing parties and SNS join the parliament. It would make sense for smaller centre-right parties to form a pre-election coalition, because I doubt that they could all join the parliament as individual candidates, also given the results of the opinion poll. In addition to SDS, which will sooner or later receive by far the highest number of votes on the centre-right, there seems to be at most enough room for two more centre-right parties in the parliament. However, the survey shows that both SLS and SNS have realistic chances for joining the parliament. The presidents of both parties, Zidanšek and Jelinčič, are currently rather inactive, so they still have a lot in reserve if they decide to activate the party network. The Voice for Children and Families is at least for now below the parliamentary threshold and will apparently need to work very hard in order to join the parliament. It seems that the answer to the question of which small left-wing and right-wing parties will join the parliament and which will end up just short of the threshold will also be of key importance in whether the next coalition will be a continuation or a discontinuation of the current one and whether there will be a change in the management of the country or not. The party that will reach the parliamentary threshold will be a decisive factor in determining the nature of the coalition, and the party falling short will have no say in the matter. Many voters are still undecided, so like usual it will be most important what will happen in the spring, in the last months before the election, and who will be able to convince and activate the still undecided and passive voters to go vote.” 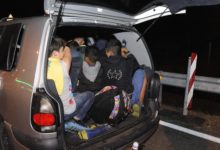