Prime Minister Janez Janša: The Government and the Ministry of Defence have therefore already taken the necessary measures to improve the situation in the Slovenian Army!

“The Slovenian Army is the foundation of the defence system and should be treated as such. In recent years, far too little money and attention have been given to the Slovenian Army, so the Government and the Ministry of Defence have already taken the necessary measures to improve the situation in the Slovenian Army,” Prime Minister Janez Janša emphasized during his visit to Ivan Cankar Barracks in Vrhnika. He praised the implementation of the exercise Preskok 20 (Jump 20), and pointed out that he had heard positive feedback in his dialogue with the mayors.

At his visit to the Barracks in Vrhnika, Janša was greeted by the Minister of Defence Matej Tonin, the Chief of the General Staff of the Slovenian Army Robert Glavaš, and the Force Commander, Brigadier General Miha Škerbinc.

During the first part of the visit, the Force Commander presented the work of the Slovenian Army during the epidemic of the infectious disease COVID-19, a series of exercises called Preskok 20, and the introductory analysis of the exercise, which is a good starting point for the work of the Slovenian Army in the next planned period. A crucial matter to point out is that the members of the armed forces have managed to implement the Force Commander’s introductory guidelines from March 2020, namely: maintaining their own health and the health of their families, providing support for the Civil Protection and other state bodies, maintaining operationality in international operations and missions, and carrying out the basic mission, which is defence and deterrence.

In many ways, the exercise Preskok 20 will be remembered as a special exercise. This was a set of tactical and staff exercises of various sizes, from individual platoons to the entire structure of the force. 2,500 members of the Slovenian Armed Forces were directly involved in the exercise, and as many as 3,500 were involved indirectly, which represents the vast majority of the forces stationed in Slovenia. There was extremely little time available for planning, as only three days passed from the time of the decision of the Government of the Republic of Slovenia to the start of the first tactical exercise. The exercise lasted for 67 days, from April 14th to June 19th, 2020, making it the longest exercise in the history of the Slovenian Army.

A dynamic display was performed
The exercise also provided a number of starting points for future work, which the Force Commander and the Chief of General Staff described to the Prime Minister and the Minister of Defence, and which will surely be the subject of serious consideration in autumn. This was followed by a dynamic demonstration by the members of the 1st Brigade, the Specialized Military Police Unit, the Special Operations Unit, the Logistics Brigade, the 15th Air Force Regiment, and the 31st U.S. Air Force Fighter Regiment. Combat units, as well as combat and non-combat support units were engaged, thus demonstrating the best way for the joint fighting of the clans, which is one of the more important objectives of the exercise.

In recent years, far too little money and attention have been given to the Slovenian Army, so the Government and the Ministry of Defence have already taken the necessary measures to improve the situation in the Slovenian Army. So the status of the soldiers will be partially regulated and supplemented, the salary position of the soldiers will be improved, and additional funds for equipment will be provided for the long and medium-term.

Prime Minister Janša also praised the implementation of the exercise and pointed out that he had heard very positive feedback in his dialogue with the mayors and thanked the locals for supporting the members during the exercise. He highlighted the good work of the members of the Slovenian Armed Forces at home and abroad, and the need to provide equipment and weapons, and better status for the members of the Armed Forces. He also thanked the Slovenian Army for all the support during the epidemic of the infectious disease. 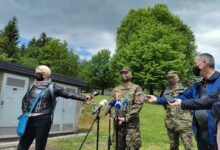 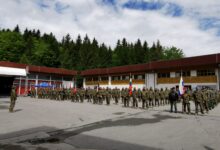 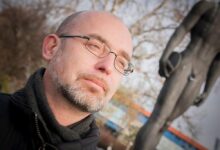 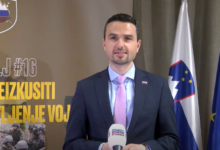