Šarec, Kozmelj, and Črnčec – they all lied! The employment of beautiful Nataša was the first request Kozmelj made after coming to SOVA!

The web portal Požareport revealed the epilogue of the Beautiful Nataša affair, in which the former Prime Minister Marjan Šarec forced the employment of his acquaintance, Nataša Hribar, in SOVA (Slovene Intelligence and Security Agency). The information was allegedly revealed by the head of the human resources department, agent M.S., at the KNOVS (Commission for the Supervision of Intelligence and Security Services) testimony on Friday.

Former Prime Minister Marjan Šarec, Šarec’s advisor Damir Črnčec, and former director of SOVA, Rajko Kozmelj, lied about the employment of Šarec’s acquaintance. The request for employment was submitted on the first day of Kozmelj’s term in office, as he demanded that the head of human resources at SOVA, M.S., hire her. After the new director of SOVA, Janez Stušek started his term in office, she was to be transferred to the “pool of agents” of the Slovene Intelligence and Security Agency.

Remember: when the affair was revealed, Marjan Šarec assured the journalist of Nova24TV, Marjanca Scheicher, that he had no influence in the employment of his acquaintance. He also claimed that he had not seen her for a very long time and had no contact with her. The facts that were later revealed show that the president of the LMŠ party was lying.

Marjan Šarec lied and misled the Slovenian public in the matter of employment of his acquaintance
It is also worth mentioning that during the time of Šarec’s government, the relations between KNOVS and SOVA were tense, and the employment of the Prime Minister’s friend Nataša Hribar at the agency, was at the core of the problem. The KNOVS report shows that Nataša Hribar did not even meet all the conditions for the job post, but Prime Minister Marjan Šarec claimed she did.  She even received a positive medical certificate, even though she was on long-term sick leave at the time, she also does not speak a foreign language, and was employed in a job where she was supposedly involved in international cooperation?!

Regarding the statement that not everything was as it should be when it came to the employment of his friend, the Prime Minister said some time ago that he himself was not there when she got the job, and so, it is difficult for him to judge. “This is a matter of the inspectorate and SOVA,” he said. However, he announced that he would respond to KNOVS’ invitation, out of respect for the parliamentarism and the institution itself, “but not out of respect for those who are in charge of the commission.”

But then, even before KNOVS started researching the employment in question, Šarec claimed that Hribar got the job at SOVA because “she applied for it and everything was done according to the procedure.” When asked If he would resign if any of this turned out to be untrue, he said, “nothing will turn out to be untrue, because we follow the rules.” But it did turn out that Šarec did not follow the rules, and that our former Prime Minister lied to entire Slovenia.

The fateful interrogation at KNOVS caused Šarec’s “unexpected” resignation
It should also be pointed out that Marjan šarec went to the KNOVS hearing on January 24th, 2020. Prior to the interrogation, he claimed that the whole thing was only a political construct of the opposition. On Monday, January 27th, 2020, at 10 a.m., he unexpectedly offered his resignation from the position of Prime Minister. At that Friday’s fateful hearing, he was reportedly surprised by the news that the head of human resources, agent M.S., publicly disclosed the employment of his fateful lady. The hearing of agent M.S. took place on Friday, July 3rd, 2020. This marks the beginning of the end of the former mayor of Kamnik’s political career. 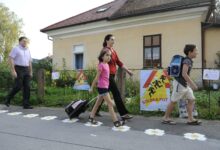 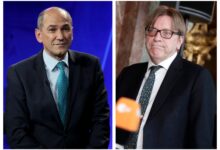 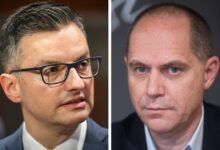