The protests are becoming more and more degenerate and violent: this is how they “stoned” Janša! 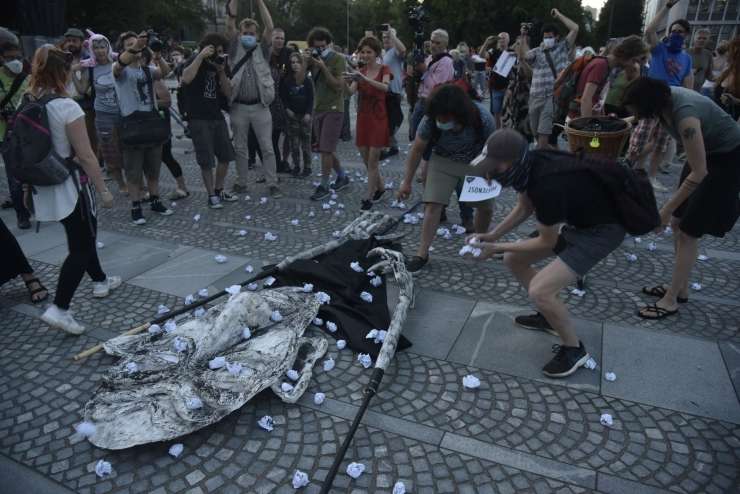 The protesters have now gathered for the eleventh time in a row and staged a new show. This time, they decided to symbolically stone the Prime Minister Janez Janša, which is a constant and cruel practice in the Islamic world, where Sharia law prevails. For the purpose of this act, they made a puppet, which they symbolically stoned with “stones” made of paper. Following the banners with death threats, “stoning” is only an escalation of violence by the radical leftists. Therefore, we call on the law enforcement authorities once again to finally stop this madness before the worst happens.

Jaša Jenull remembered to prepare a programme this time as well, and he staged a play on the Republic square, which he named “Janšemet” (Janša-throw). For this week’s play, they made a puppet that was supposed to represent Janez Janša, and then they threw stones made of paper at it, to illustrate stoning. Since this is an act of violence, it should certainly be condemned, but in all probability, the protesters will once again use the excuse of freedom of whatever they will think of.

Jenull was, of course, once again the main host and commentator of the event. During the events, the protesters thus also chanted “for truth and solidarity,” “he is evading, but he cannot escape,” “only with perseverance will we win.” Friday’s events are thus becoming more and more reminiscent of the theatrical plays, which is, of course, much better than the protesters being violent against the police and others. However, the protesters did learn something during all this time, as the main commentator of the event called on the participants to pick up all the rubbish after the protests and use it for next time. Among other things, a pig was also present at the protests – it was probably Jenull’s.

Stoning is one of the most brutal forms of violence, typical for Muslim countries and widespread from Nigeria to Pakistan. In Iran, this form of punishment is used for all those accused of adultery, both women and men. It is generally accepted that those who are punishing the accused should not throw big stones, so the suffering of the accused is not too short. If a person manages to survive the stoning, they let them live. In Iran, this method of punishment was banned, but according to reports, it still happens sometimes.

MP Branko Grims condemned the actions of the protesters, as he says that this is an imposition of foreign traditions. Stoning is one of the most radical features of Islam, completely unacceptable to European civilization. In any case, Friday’s events should give the leftists something to think about – perhaps they should think about what is happening in the civilization they so passionately defend, and they could also fight to prevent violence.