People at the Gimnazija Ormož school (upper secondary school) have permitted an unacceptable deception of young people who have just acquired the right to vote or will acquire it in the next few years. During school hours, they prepared a screening of the film Fear in the gym, and all four years were invited to watch it. In the film, actors with Nazi swastikas depicted the Slovenian right and consequently instilled fear in young secondary school students about life in Slovenia if a right-wing party wins at the coming parliamentary elections.

Our source, who does not want to be named because of the small size of the local community (his information is being kept in the Nova24TV editorial offices) told us how it all unfolded: “It all happened last week, in the morning during school hours. Each student brought his or her chair into the gym, and in the end around 400 students gathered there and we watched the film Fear together. It was horrible, it depicted true fear, ‘angst’ even,” he said. He continues: “And then the whole film is about how it’ll be if a right-wing party rules in Slovenia. We’ll be spitting at each other in the streets, blood will flow.” He adds that the film is unwatchable since the actors spit on each other and constantly fight, and it is inappropriate for young students because of too much violence. “I’ve never seen as much violence as in this film. And swastikas everywhere,” he concluded. Let us reveal that our source is an older adult and that he has experienced much in his life but – as he stated – never such violence. What stayed in his memory from the presentation of the film was the information that it had already been shown in 16 schools, and around the same number are scheduled for a “premiere” of the film in 2018. 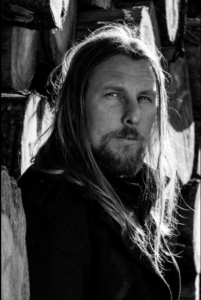 Obviously, the Slovenian left is already using all manner of attacks in preparation for the parliamentary elections, and it is clear that they are not selective in their means. But it is pathetic that they have gone after young people, who are just forming their political position, and that they are misleading them with lies. Slovenian right-wingers do not adorn themselves in swastikas, unlike the Slovenian left, who hang pictures of the mass murderer Tito and appear on celebrations with a red star, a totalitarian symbol under which innocent people had been imprisoned and killed. 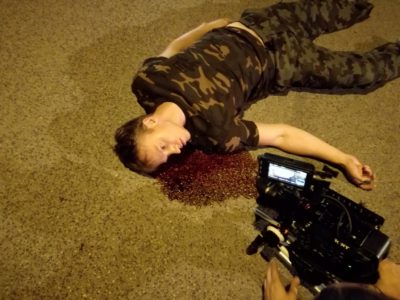 Babošek warns against the “violent right”, but he is the one showing such bloody scenes. Photograph: Dejan Babošek’s Facebook profile

Main hero is Slovenian right-winger as neo-Nazi?
The director of the film is Dejan Babošek, who says in his biography that he was born on 1976 in Yugoslavia, in Ptuj. So far, he has made four films, but none of them is worth mentioning let alone seeing. But he seems to have worked hand in hand with the Slovenian left during the production of Fear and thus at least managed to reach Slovenian schools, where they force children to watch this violent film. In the description of the film, Babošek states that it is “a contemplative film” and that “the film was inspired by fear. Not his own, but the fear of others. He noticed that in the time when the mass migration of refugees and migrants reached the Balkans, two poles formed in Slovenia. He was particularly disturbed by the strong anti-refugee propaganda, which was incited publicly by the Slovenian right. According to him, the latter still fuels fear and hate,” says the description of the film. It goes further: “Babošek believes that what is happening today is some sort of remake of the political situation in Germany in the 1930s. This also gave rise to the idea to shape the story of the film around a neo-Nazi.” 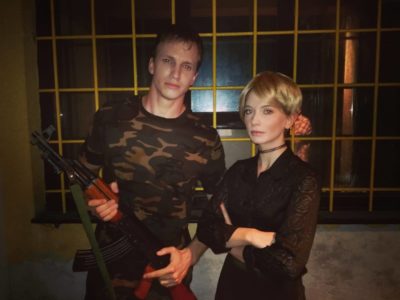 “Fear has undoubtedly become the number one weapon, especially in the hands of political parties,” Babošek targets the Slovenian right. He put a literal weapon in the hands of his actor. Photograph: Dejan Babošek’s Facebook profile

The principal of Gimnazija Ormož, Blanka Erhartič, therefore knew exactly what kind of film would be shown, since the description is part of the invitation, but she nevertheless permitted secondary school students, most of whom are not even adults, to see a film full of violence that is based on German neo-Nazis but looks for parallels with the Slovenian right. It is a completely misleading story full of violence, but this was obviously not enough for Erhartič to use some critical thinking (or at least common sense) and say “no” to having the controversial film shown at her school. 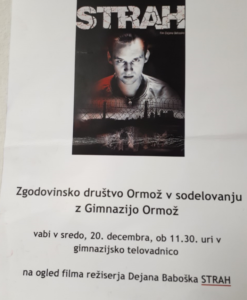 Leaflet which invites students to watch the violent film during school hours.

They want to manipulate Slovenian students
The last part of the description of the film also emphasises Babošek’s words: “Fear has undoubtedly become the number one weapon, especially in the hands of political parties. In the film Fear, a secondary school student is taken in by just such a manipulation by the far-right. With the doctrine of fear, it is easy to provide the dissatisfied population with an enemy that seems to represent the whole societal problem. What this leads to can be seen on countless examples from history. Unfortunately, people have a bad memory, and another factor is also that history today is often distorted.” But the fact is that Slovenian history has been distorted for the last 70 years, ever since the second world war, and that the real truth has only started coming out in the last few years. New mass graves are being discovered on a monthly basis all over Slovenia; the Slovenian left used them to “hide” people who it recognised as its (political) opponents. Of course, the character of a secondary school student in the film was meant to influence their emotions, frightening them about the life that awaits them if the Slovenian right wins at the parliamentary elections in 2018. It is true, young people are just getting to know history and do not have an established position like adults, so it is very easy to manipulate them, which the left exploited disgustingly.

But watch the trailer for the film, which is full of curses, and decide for yourself whether you think it is suitable for children:

We have also sent questions to the principal, Blanka Erhartič, and also forwarded them to the general e-mail address of Gimnazija Ormož. We asked: “Why did you screen this politically incorrect and misleading film during school hours? How did the students respond to the violent scenes? Do you think it is appropriate to show such a film full of violence to people that are not yet adults, i.e. children? Did you ensure suitable psychological care for the children after they had watched the bloody and violent scenes? Given that you were aware of the violent content of the film, which could mark young people for the rest of their lives, will you offer your resignation?”

We will publish the answers when we receive them. 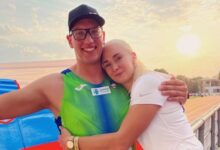 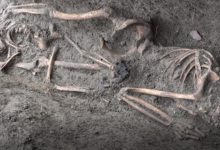 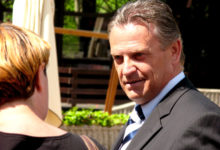 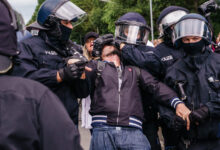