Jambrek: The mainstream media are disguised as Đilas’ new class, which is the class of the former Party and today’s statist political bureaucracy! 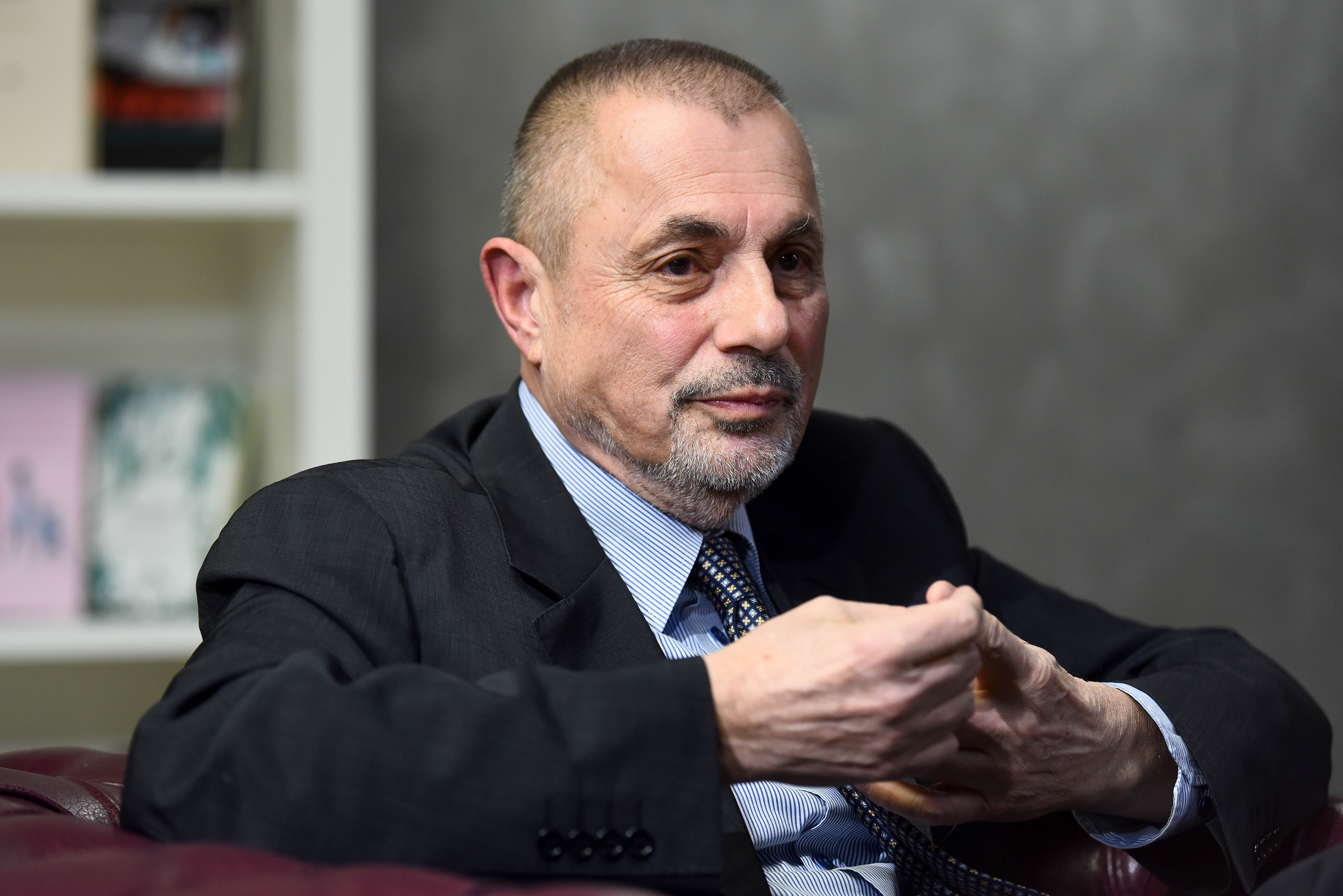 “As I have already mentioned, the corpus of the five central, majority media outlets in the country – including the public RTV – supports the strategic orientations of the parties of the transitional left. From the socio-systemic point of view, these orientations are conditioned by the interests of the classes that make up Đilas’ new class, the class of the former Party, and today’s statist political bureaucracy, which has converted and disguised itself during the 30-year transition, in a barely noticeable way,” the former President of the Constitutional Court, Peter Jambrek, Ph.D., wrote about the state of the majority media in Slovenia, which have attacked Dimitrij Rupel, Ph.D.

The dominant media outlets, mostly owned by the economic and political currents of the transitional left, have reactivated the “concerned” journalistic associations from abroad. This time, the General Secretary of the European Federation of Journalists (EFJ), Ricardo Guiterrez, spoke out and expressed concern over the Slovenian government’s decision to nominate former Minister of Foreign Affairs, Dimitrij Rupel, for the position of representative for freedom of the media, at the Organization for Security and Cooperation in Europe (OSCE).

As has often happened during the current government’s term, the dominant mainstream media call their ideologically oriented friends from abroad for every little thing that does not suit them and start telling stories about the democracy, freedom of speech, and media autonomy being endangered in Slovenia. Dimitrij Rupel, the former editor-in-chief of the newspapers “Tribuna” – The Stand (1968- 1969), “Problemi” – Problems (1970-1971), and “Nova revija” – New Magazine (1984-1987) responded to Guiterrez’s harsh criticism. Unfortunately, it has been proven once again, that in Yugoslavia, Rupel experienced everything that the independent media outlets in the hands of the former regime are accusing the current government of. “In dictatorships, such as Yugoslavia (and with it, Slovenia), the authorities may persecute the journalists and freedom-loving authors: in Slovenia, they focused on the cultural magazines (Perspektive, Nova revija …), because the dailies and the weeklies were under the strict control of the Party anyway. However, the exact opposite is typical for democracies: the media and the journalists can control and criticize the government as much as they want!” Dimitrij Rupel, Ph.D., a former long-time Slovenian Minister of Foreign Affairs, responded to the criticism. Peter Jambrek, Ph.D., also wrote a letter in defence of Rupel. We are publishing his letter in its entirety below:

Jambrek: It is widely known that there is a preference for the transitional left
Critics of the current Government of the Republic of Slovenia are concerned, among other things, about its positions and alleged interventions, claiming that they are restricting the freedom, autonomy, impartiality, and the financial foundations of the country’s main media institutions. Critics say that the government does not provide for the fundamental constitutional and democratic rights of the citizens and voters to freedom of expression. The question of whether these concerns and allegations are being addressed to the right people inevitably arises.

This is about the position and direction of the central and leading print and electronic media outlets, such as Delo, Dnevnik, Večer, the public Radiotelevizija Slovenija, and the private POP TV. The information and comments published in the aforementioned media outlets, regarding the current and long-term political events in the country and abroad, represent the main, decisive, core, and majority corpus of public messages. These media outlets and their political messages decisively condition the exercising of the right to freedom of expression of the Slovenian public, in the sense of accepting, collecting, and disseminating the information and opinions. Namely, Article 39 of the Constitution protects the fundamental democratic rights to freedom of expression of thought, speech, public appearance, and other forms of public communication and expression. Therefore, we are interested in the role of the central and dominant Slovenian media outlets, their editors, journalists and commentators, in the aforementioned bilateral process of expressing and accepting thoughts, news, opinions, and information.

In the Republic of Slovenia, the fact that the central Slovenian media outlets mentioned above, consistently and fully operate in accordance with the ideological and current political preferences of the transitional left, is widely known, researched, published in the professional press, and proven on the basis of concrete examples. For this option, which is neither left nor social democratic in the original historical sense of the Western European political culture, the synonymous names “continuity” and “transitional left” have been established.

In the organizational sense, the transitional left consists of the political parties, which, at the time of Slovenia gaining its democratic and constitutional independence, emerged from the so-called “socio-political organizations” of the former undemocratic regime, specifically from the League of Communists, the Socialist League of Working People and the League of Socialist Youth. Soon after Slovenia gained its independence, the generic term “party of the socialist self-government” became established, especially in the magazine Mladina at the time.

As I have already mentioned, the corpus of the five central, majority media outlets in the country – including the public RTV – supports the strategic orientations of the parties of the transitional left. From the socio-systemic point of view, these orientations are conditioned by the interests of the classes that make up Đilas’ new class, the class of the former Party, and today’s statist political bureaucracy, which has converted and disguised itself during the 30-year transition, in a barely noticeable way.

All ideological opponents of the transitional left are labelled as class enemies
The politics, agitation, ideology, and propaganda of the current Slovenian transitional left and its media – all of the main print and electronic media in the country – represent a substantive continuity of the Party’s instructions from the period of the former undemocratic regime, translated into looser, more general, but recognizable ideological clichés of the “first-class” and the “second-class,” along with the appropriate media ranking and selective publication of political news and values.

The same is true for public figures: Those that are not “ours” are treated in the same way as during the former undemocratic regime, as the “class enemies” – internal and external, they are branded and labelled as “right-wingers,” non-liberal populists, authoritarians, etc.

The following topics and orientations are considered to be “first-class,” and are therefore systematically privileged in the Slovenian central – or, to put it more directly and precisely – the Slovenian Party media (Delo, Dnevnik, Večer, RTV, POP TV):

Public figures that are “ours” are promoted, praised, flattered, sucked up to, and commended by the central media of the Slovenian transitional left – those still alive, as well as the already deceased.

The central and dominant media outlets are distinctly, emphatically, and recognizably biased in favour of the Slovenian transitional left. The complete imbalance of the media space represents a radical and systematic interference with the constitutional right to freedom of expression of at least half of the Slovenian electorate. On the other hand, such a restriction of the right to freedom of expression constitutes a decisive privilege and a universal advantage of the transitional left in all democratic processes in the country.

The majority of the Slovenian media outlets operate in the political subordination to the transitional left
Therefore, the calls for the full preservation of the established privilege of a media monopoly are understandable. This applies to all calls and invocations for media “independence” (read: dependence), “autonomy” (read: political subordination), “impartiality” (read: bias), “professionalism” (read: propaganda and ideological one-mindedness), financial resources (read: maintaining the budget monopoly of the left-wing RTV and other “central” media outlets), and for the statutory status of today’s Slovenian central media outlets, which are actually the Party’s bulletins.

Since the formal admission of the current Government of the Republic of Slovenia to office, Slovenia’s dominant print and electronic media outlets have been promoting their own position of the central ideological apparatus of the ruling bureaucratic classes and their parties of the transitional left. Maintaining their status quo would mean the continuing of their subordination to a single political option, their consequential bias, dependence, lack of independence, unprofessionalism, and questionable professional ethics.

Any change in the current status of the Slovenian media in the direction of their political, value, and ideological plurality, would mean a welcome departure from the current systematic, mass and serious violations of the fundamental democratic rights to freedom of expression, protected by the constitutional and European norms.

When the Cold War ended, the political changes in Central Europe were, in fact, “velvet.” Due to the mostly democratic, humanistic, cultural nature of the governments and parties that initially replaced the Communists, many structures of the old regime remained intact, but over the years, they have reproduced and strengthened. This also applies to the field of media, which has preserved its old habits and criticized, even slandered, new democratic institutions, claiming that they are undemocratic.

Many media outlets in the West bought into this rhetoric – of course, with the help of the export incentives or the mediation of the domestic “guardians of democracy,” who are essentially the guardians of the acquisition of socialism. At the Bled Strategic Forum (August 31st, 2020), we heard the confessions of the Central European leaders, who said that they are constantly being exposed to false information, in their own, and even Western media.

Therefore, this is not a Slovenian specialtye but a general problem.