The National Assembly has never seen anything like this! The MP with the red star on his lips had an outburst…

One of the most provocative deputies of the Radical Levica party, Miha Kordiš, has reached a new low in explaining his vote on the amendment to the Defence Act, which regulates the status of soldiers after the age of 45. Instead of Kordiš explaining why he does not agree with the proposed amendment with calm rhetoric and arguments, he resorted to insults. He said the Social Democrats are collaborators, and the members of the government of Janez Janša are fascists. The leader of the SD parliamentary group, Matjaž Han, lost his temper because of Kordiš’s primitive rhetoric and replied: “I do not want to work with people like you, who insult me ​​and call me a collaborator and them fascists. I don’t want to work with such people!”

In the explanation of his vote, Miha Kordiš, an MP with the red star on his mask, pointed out that he believes that what Minister of Defence Matej Tonin proposed does not actually resolve the problem of the status of soldiers after the age of 45, but rather, legalizes the mechanism for the corruption of personnel. “Personnel corruption is a very big problem at the Ministry of Defence, and especially within the Slovenian Army. Those of us who are keeping an eye on this situation can tell you that this is true. In this context of personnel corruption – who can stay in the army and who can advance, who must leave, and to which positions the soldiers are transferred after the age of 45, the Social Democrats are also involved, of course.”

Kordiš then pointed out that this is a law that needs a two-thirds majority. “Dear citizens, ladies and gentlemen, if the opposition stuck together, this harmful law against soldiers, which legalizes personnel corruption, could be overthrown, but we will not stick together. Do you know why? Because the Social Democrats are collaborating with the fascist government of Janez Janša in order to legalize personnel corruption in the Slovenian Army. I will vote against this law, I will vote for the Slovenian Army to get a proper regulation for its social status, which will be custom-made for them,” Kordiš concluded.

Han responded to Kordiš’s insult and stressed that he does not want to cooperate with people like Kordiš, who insult him and call him a collaborator and the members of the government fascists. “I don’t want to work with such people. I can be on all of the web portals tomorrow, for all I care. I live in this country of ours, and to me, we are all the same,” he emphasized, adding that even if Kordiš does not know how to support his claim that someone has got something wrong with arguments, he cannot just offend others. Han called on Kordiš to apologize to him, his parliamentary group, and the government.

Kordiš did not manage to apologize, due to his own political assessment
The Speaker of the National Assembly of the Republic of Slovenia, Igor Zorčič, told Kordiš that he is issuing a reprimand for him, based on Article 77. “This is the last warning. If I have to reprimand you one more time, I will also take the floor from you, and you will not get the opportunity to explain your vote on the following points,” Zorčič made it clear. Kordiš could not help himself, as he was clearly not able to apologize; instead, he went on to say: “As per usual, instead of facing legitimate criticism, the opponents in the debate are fighting with the label of insulting. Where exactly did I insult anything? Ask the unions; they will tell you a lot about what personnel corruption in the Slovenian Army is. Ask them. It is also true that the government of Janez Janša is fascistoid. That is my political assessment. I stand by it.”

Zorčič was justifiably angry, so he told Kordiš that it was his turn to share his procedural proposal. “If you have a procedural proposal, share it with the Assembly, and if not, I will take the floor from you!” Kordiš explained that he was responding to the procedural proposal for him to apologize. “If you will allow me to speak, of course. I think you should let me speak. You allowed the gentlemen who spoke before me. Why don’t you let me speak? It was my turn to explain my vote, and you turned off my microphone.” Zorčič lost his temper because of Kordiš’s behaviour once again, so he warned him: “Colleague Kordiš, you created this situation, if you want, you can apologize, and if you do not have a procedural proposal, I will take the floor from you.” Kordiš could not help but comment on how supposedly, the truth is a provocation under the government of Janez Janša. Zorčič took the floor because of Kordiš’s behaviour, which is how his outburst ended.

Some commentators have begun to wonder if drugs might be the reason for such behaviour
Kordiš’s outburst disturbed many who attended the 20th regular session of the National Assembly of the Republic of Slovenia. Namely, many responded to the situation online, with comments, such as: “The President of the National Assembly should have the authority to expel such a primitive and insulting deputy from the session, without any objection, and fine him at least 1,000 euros. After three outbursts, he should be banned from all further sessions. And also, the Kordiš type should not be voted into the National Assembly of a normal country at all.”; “Vacant stare, blurred eyes on X, insulting others with words, such as collaborators and fascists. Miha Kordiš from the Levica Party! A shot in the foot for the opposition, which is supposed to be looking for a common denominator. And these are the people who are supposed to take over the responsibility and form the next government? I wonder which ministry they would give him.”; “Slovenians have no one else to blame but ourselves. We just let Kordiš and other people of his kind – I will not name any names – into the parliament.”; “After today’s outburst, I think it’s time to introduce regular drug testing for the members of the National Assembly! This is not normal.” 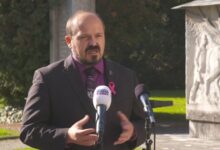