Hatred exists, but at least now we know who is spreading it

On Friday, a small group of people gathered in front of the National Assembly, for the rally »Against hate.« But only a naive person would still believe they are fighting against hate after all that has been seen and written, as we haven’t heard so many hostilities, threats, and even calls for a massacre of the opponents, since the all-Slovenian uprisings, led by the same people.

The bonfire at the beginning of the rally was lit by the columnist of Maribor’s Večer, Svetlana Slapšak, who said that the opponents of the left should be unconditionally destroyed. »Janša and his supporters, the opposition’s media and those rare centre politicians who are not too scared yet, need to be destroyed in a Machiavellian way. Truth and honor be damned. They are the architects of evil,« Slapšak said. So, everyone who is not with us needs to be destroyed – unconditionally. This is what the Nazis said in Germany, before the Crystal Night (Kristallnacht) and before they took millions of Jews and others to concentration camps.

The fact that the protesters think they can do whatever they want was also evident from the statement madeby the next speaker, who feels that SMC and DeSUS should both explain their decision to the left-wing voters.

Threats of the radical left
»You owe us an explanation for your every decision, move, vote. These are the conditions under which we have given you the mandate,« said Maja Cimerman of the institute Today is a new day. And then immediately a threat, beware if you don’t do what we want. »Today, we are here to give you one last chance. Next week, vote as you have promised.« 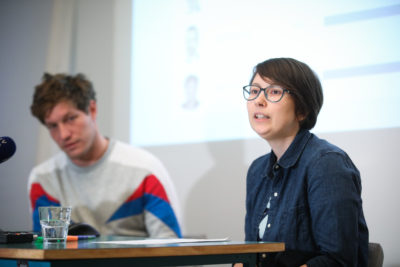 Maja Cimerman from the Today is a new day institute. (Photo: STA)

But it did not end there. These compassionate, conscious people, who fight against hate, then started to label the politicians of DeSUS and SMC, calling them every possible hate word, and finally decided that they are »finished.« Death treats in the Slovenian capital again.

Calls to violence
Of course, the protesters who fight »against hate« also chanted peaceful slogans, or at least they probably thought they were peaceful. For, you do not fight hate by chanting the words »finished« and »traitors« and, of course, the rally’s main call, »kill Janša.« Of course, there was no lack of communist iconography at the rally, from T-shirts with Tito’s picture, to red stars and captions, such as »Collaborators and traitors will be judged by the people,« »Death to Janšaism,« and puppets, demonizing the presidents of the coalition parties with devil horns and bat wings.

The protesters proved that this was actually a rally of vulgarity and hatred, and not a rally against hate, as they chanted »kill, kill Janša.« Therefore, calling for the murder of someone, is their way of fighting against hate.

The protesters have already told the public that this was a right-wing provocateur, but of course, they are lying. It was actually one of them, Ludvik Tomšič, who does not hide his love for Marshal Tito on his Facebook profile, and posts videos of partisan celebrations. Calling for the assassination of SDS supporters, the opposition media and the murder of the future Prime Minister is therefore considered a »fight against hate.« It’s up to you to decide. But don’t think that this manifestation of hatred was the last one.

“Let the blood flow”
»This is the biggest megaphone we have on Kersnikova street today. Sorry, we are not very well organized, but something is telling me that we have two years to learn how to demonstrate well,« a left-wing activist Vuk Ćosić said.

Two years for demonstrations and bloodshed apparently, since at the end, they were already singing rebel songs about how they would shed the blood of the future government. »The castle is burnin;  the count is running away. Wine is flowing, let the blood flow too!«

The worst part of the process, which, after Svetlana Slapšak proved, that these are extremely deranged individuals, was the chanting of »kill Janša.« The protesters supposedly distanced themselves from this and booed, but unfortunately, they are lying. The following clip clearly shows that they were laughing, clapping, and repeating the words »kill Janša.«

Hatred has flooded Slovenia
Hatred has really flooded Slovenia, but it is caused by the same people, who claim they are fighting it.  We have not seen such hatred towards individuals and entire groups of population in a long time, but otherwise, the protest was a miserable story. Only a few hundreds of protestors, some on-duty anarchists and a few retired aunts and uncles, so mostly the people, who are latched on to the budget.

Even so, the police should do their part and take the threats seriously. But as with most left-wing protests, this time, they also stood by and even laughed with the protesters. Hatred exists, but at least now we know who is spreading it. 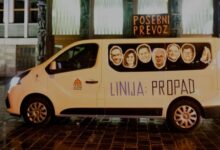 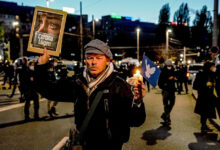 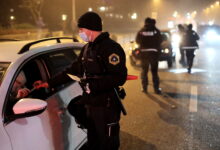 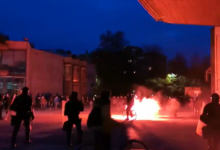 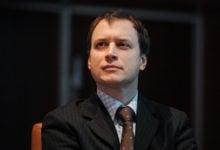