Here is how the frontman of Levica, Luka Mesec, is posing threats: Not only is he justifying the slogan “Death to Janšaism,” he even announced that “Janšaism” would be stopped before it grows! There is no doubt that the social climate in Slovenia is deteriorating – mainly due to the left-wing extremists. After all, they even began to publicly display the slogan “Death to Janšaism,” justifying it as a kind of new anti-fascist paradigm. But at the same time, they are proving that modern anti-fascists are the most dangerous group of fascists.

On Monday, the frontman of Levica, Luka Mesec, who is also a member of the National Assembly, proved this to be true. We are publishing his writing in its entirety, to better illustrate our point. You can read it below, in italics:

This is the answer that Janez Janša had just given to Violeta Tomić:

“You say that the slogan ‘Death to Janšaism’ is not an attack on a single person. Look, in the 1930s, people in Germany shouted ‘Juden Raus,’ and we all know how that ended.”

Oh yes, we do know how it ended, Mr. Janša. They killed millions of Jews, Slavs, Roma, dissidents, and their hatred escalated into the greatest horror in human history, before they were stopped. The fascists, namely.

But we also know how it started.

The media were called liars, “Lügenpresse,” just as you are calling the national media “ventilators for fake news.”

The art was declared to be degenerate, “Entartete Kunst,” just like you criticized the Prešeren award laureates last year.

Incitement against the Jews, Slavs, Roma, was declared freedom of speech, just like what you say when you incite against the refugees, gays, leftists, southerners, journalists. Or, to use your language: raping migrants, communists, presstitutes, sandal-wearers, sweatpants-wearers, and others.

They developed the cult of personality around their Führer.

They intimidated their political opponents, just like you, through your media outlet and Twitter – as the Prime Minister (!) – are intimidating ordinary citizens who take part in a protest or just tweet something against the Government.

They shamelessly installed their subordinates in the state apparatus and called the opposition treasonous.

And last but not least, like you, they were ignorant at every turn and presented themselves as the victims. Just as you put yourself in the position of Jews today, the victims, even though your phalanx is the one persecuting the modern-day Jews.

And that is why, Mr. Janša, we will stop Janšism before it grows into full-blown fascism. We all learned something from the 1930s – except that we read the lessons as a warning, and you read them as a textbook.”

It is not entirely clear in what way Mesec intends to “stop Janšaism,” but from historical experience, we can conclude that he will do it in the same way as his ideological ancestor had: through violence. Which is another proof that Nazism and Communism are just two faces of the same Janus head. 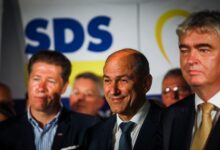