Šarec and Fajon repeatedly publicly endangered the people around themselves!

“Those working in schools wear masks, schoolchildren wear masks, as do all other responsible citizens. The Minister, however, is sitting quietly at an event where no one is abiding by the measures, including her. Even though she sits at the sessions of the government that had adopted those precise measures. I would say I am surprised, but I am actually not. It is just what this government does,” former Prime Minister Marjan Šarec wrote in a critical response to the photos, taken at the charity event of the Olympic Committee of Slovenia. All would be well if he himself also followed the rules, meaning he would be maintaining the appropriate distance and wearing a protective mask. The same goes for SD leader Tanja Fajon, who the photographers caught endangering public health during the epidemic – several times.

The photo, which was taken at the anti-ceremony on Statehood Day, where we witnessed the display of sexual organs, the worship of totalitarian symbols, and the singing of songs in foreign languages, shows Marjan Šarec in a crowd of protesters. Of course, there is not even a trace of anyone in the photo maintaining physical distance or wearing a protective mask, which is exactly what Šarec is now accusing the Minister of.

The photos are more than telling
At the time when the photo was taken, there was no government decree requiring a protective mask to be worn in crowded outdoor public places, but wearing a protective mask would be expected from the president of the largest opposition party, given that it was a mass event where not even the recommended physical distance of 1.5 meters between the visitors was maintained. After all, this was an illegal event where the anti-government protesters gathered in groups, and they have repeatedly proven that they do not follow the recommendations of the National Institute of Public Health, which issued the recommendations in order to curb the spread of the novel coronavirus infections. At any event, only a few of the protesters actually wear a protective mask.

Once again, those who do not adhere to the government decrees, adopted on the basis of expert opinion, themselves, are the loudest in criticizing others. However, it is interesting that Šarec is obviously selective when it comes to criticizing non-compliance with the measures that need to be followed on the basis of a government decree. He did not even mention the other guests, who also did not wear protective masks at the event. Obviously, there are no problems if, for example, the mask is not worn by the UEFA President Aleksander Čeferin, or Janez Škrabec, Iztok Čop… The leader of the Social Democrats, Tanja Fajon, is similarly selective as Šarec.

Fajon pointed out that on paper, anything goes. “Obviously, this also applies to the words of the Minister of Education and other officials who do not follow the rules they set themselves. We need clear instructions and sensible measures that we can trust. Hypocrisy has no place in politics,” she pointed out. Given that the MEP accused the Minister of hypocrisy, the photos taken on the March along the Barbed Wire, on May 9th, and during one of the illegal anti-government protests, are undoubtedly interesting. Of course, there is no trace of suitable physical distance being maintained, nor is there a protective mask in sight.

As the Prime Minister Janez Janša emphasized in his response to the pogrom against the Minister, the fact is that wearing a mask in enclosed public spaces is mandatory. “It’s understandable that you cannot wear it during dinner. However, in its resolutions of September 17th, 2020, the Government of the Republic of Slovenia seriously recommended that meals should NOT be organized during or after public events. The organizers of the events are responsible for complying with the rules,” he pointed out. Interestingly, however, all critics of the government, including the mainstream media, focused only on the photo at the table, not on the other photo, which shows the Minister on stage. That photo clearly shows that the Minister is wearing a protective mask after all. 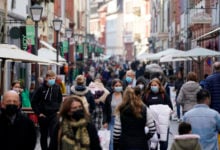