When Vika Potočnik comes on national TV as a political commentator, Žiga Turk’s job is easy

On Sunday, anchor of Politično on RTV Slovenia Tanja Gobec hosted a show about what the 14th Slovenian government, the third one under the leadership of Janez Janša, will be like. In her introduction, she emphasized that the names of the ministerial candidates indicate that the political bench is pretty short in all parties of the emerging coalition. And to top it all off, besides the former Minister Žiga Turk as a commentator, she invited the former mayor of Ljubljana and prominent representative of the former ZSMS and later LDS Vika Potočnik, who simply made up a lie about how Janša’s government is chasing young people abroad, with passports in their hands. Gobec also likened the party affiliation of the new coalition to that of the treacherous MP Ciril Pucko.

»Even a party with a long tradition which has had the same leader for a long time, can not and does not know how to find competent and responsible people,« Potočnik said. »This means that the people were once again picked from the parties, and the party system in Slovenia grows stronger. This is a major blow to democracy. Of course, it is best to choose the people from your inner circle, because they know how to be the most obedient and dutiful.« Turk responded to this by stating it was great for us to get another government since it is essential for the democracy to change power. »To change the left and right options. This is proof that democracy is working,« Turk emphasized, adding that this seems like a very good government in terms of quality.

These are not beginners; this was a good decision
»This is a two-year government that is taking over the power during a very complicated situation and consists of experienced ministers. Some of them have previously already been ministers and will be able to start work immediately. No learning, no introductory stages. These are not beginners. This was a good decision,« Turk told Potočnik. To this, Gobec responded: »But there are few women.« Potočnik agreed with the anchor and pointed out that the party first found people who could justify its stay, and then each party added one woman. According to her, the ministerial candidates have weak content.

»I think the most emancipating thing to do would be to not focus on the gender of the ministers, but whether they are competent or not. As far as the program is concerned, I think it is a realistic program,« Turk stated and added that the program is non-political and non-ideological. »It focuses on certain areas, work that should have been done a long time ago. These are measures that will make this country more effective. This is not a technical government, and there are no red zones to irritate the public,« he stressed.

Slovene politics can not be built on »antijanšaism«
Potočnik then scolded DeSUS and SMC for joining the government. In her opinion, these parties are solely driven by their own interests. Turk let Potočnik know that Slovene politics can not be built on »antijanšaism.« »These two parties acted democratically, adult-like,« he responded. »It is important to get rid of the stigma, this elimination of a quarter of the electoral body from the ambition to get into the position of power.« Potočnik said she agreed with the latter, adding: »But who is constantly putting the final nail in the coffin of democracy and is not letting it breathe. Who is the one that keeps on bringing us back to history and divide us?« Turk responded to Potočnik: »Let’s remember the 2004-2008 and 2012-2013 mandates. If you look at what happened, you won’t find anything that could be the final nail in the coffin.« As Potočnik had no arguments left, she resorted to lying and said, »This was a time when young people were given passports and pushed away, saying: you can leave and not come back!«

Gobec then decided it was time for her minute of »truth,« as she dared to compare DeSUS and SMC’s coalition entry with Ciril Pucko’s changing of the parties, who at the time of the 50:50 state, decided to become a member of LDS and thus enable Janez Drnovšek’s government to form. Turk quickly let her know that the former coalition parties are in no way a »group Pucko.« »These are two parties with their own program, who wish to survive. These are middle parties who are not ideological. For them, survival is much easier if they are part of the coalition and not the opposition.« 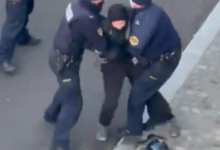 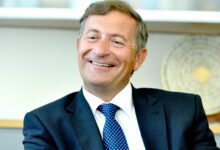 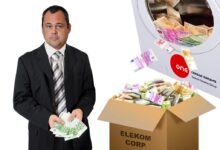 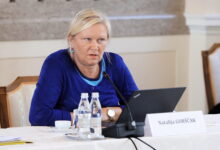